Taxidermy: Getting under the skin of a tax lawyer Ann's blog gives an insight into her world, both in and out of work.
From time to time she lets others borrow the talking stick.

Why we need to simplify our tax code – Dominic Frisby

Dominic Frisby is, unusually, a financial writer and comedian. After performing a show on tax earlier this year he was approached by Ann to write a blog and he chose this topic. If you want to find out more about Dominic please visit his website or social networks (Twitter and Facebook).

The views expressed here are Dominic’s and do not necessarily reflect those of Ann.

Back in August I took a show to the Edinburgh Festival all about tax. Not perhaps the most fertile subject for comedy – HMRC’s cock-ups aside – but I’d concluded that the dearth of media about such an important subject needed to be put right.

Tax is and has always been power. Whether kings, emperors or governments, if they lose their tax revenue, they lose their power. The aim behind every conquest in history has been to take control of the tax base. The purpose of every revolution is pretty much the same. Every war has been funded by some kind of tax, either before or after the event.

Tax permeates everything that we do. It’s as much a part of our lives as eating, drinking or sleeping. Can you name me an activity – apart from breathing – that doesn’t involve taxation in some way?

I know what you are thinking. All you’re doing by that is creating future taxpayers.

The way that a society is taxed speaks volumes about that society. In the UK taxes are taken at source, by stealth, by force and without choice. So, there’s a relationship between taxation and freedom, as well.

Changing the way we are taxed is one of the few ways by which politicians really could change the world. Yet all they really seem to do is tinker around the edges.

Given how important tax is, and that ours is the fifth largest economy in the world, and that this is the 21st century, you might expect the body in charge of tax to be a slick-running operation. Instead, we have HMRC.

In 2010 it emerged that one quarter of the UK working population was on the wrong tax code. In 2011, six million people found themselves erroneously in line for tax rebates because of a computer error. In 2012, one million letters to HMRC went unanswered. Seven of them were from me. Every year there’s another catalogue of errors – too many to list.

If you ever try calling HMRC, you’ll have a long wait. Average waiting times last year were 47 minutes per call to get through to an advisor. Phone companies made £97 million from people kept on hold.

My favourite communication from HMRC reads:

Our records show that despite previous requests, you still haven’t paid the full amount you owe us.

You must pay the full amount within 7 days of the date of this letter ….

If you do not pay or contact us, we will take action. We can make you pay what you owe by seizing your goods and selling them at public auction, as the law allows. We can charge fees for this, so if you don’t act now it could cost you more money …

Where appropriate, we can … take from your pay or pension to pay what you owe.

Or, we may pass your debt to a debt collection agency who will collect it for us.

I don’t think that’s quite the time to be pushing the social media. Nevertheless, somebody wrote that letter. Somebody else approved it. It shows the lack of thought which pervades the operation.

Despite a proven track record of charging people the wrong amount, HMRC is now demanding the right to access your bank account if it thinks you have paid the wrong tax. To have a government body that aggressive and authoritarian, but also that incompetent, is a dangerous thing. Lives have been ruined as a result.

There is the terrible story of Patrick Cullinane, an occasional film extra, who was bankrupted, kicked out of his home and driven to a mental breakdown as a result of a dirty tricks campaign by HMRC. Or there’s the case of Peter Patton, a former civil servant who retired in 1999. In 2009 he woke up to a bill through his letter-box from HMRC for £10,0459. He was so scared he paid it. It turns out the reason for the bill was that HMRC had applied incorrect codes to his income, but he was told the bill could not be challenged. It was only when consumer champion Jessica Gorst-Williams took up his cause six years later that HRMC relented and refunded the money.

Such a body cannot be given yet more power until it proves its competence consistently over a number of years.

HMRC is under-resourced, for sure. Given that it is in charge of collecting revenue, you’d think it would be the best-resourced of all government departments, but it isn’t.

Ten million words is more than many read in their entire lifetime.

Here’s a bar chart I drew for the Edinburgh show, which illustrates the magnitude of that number: 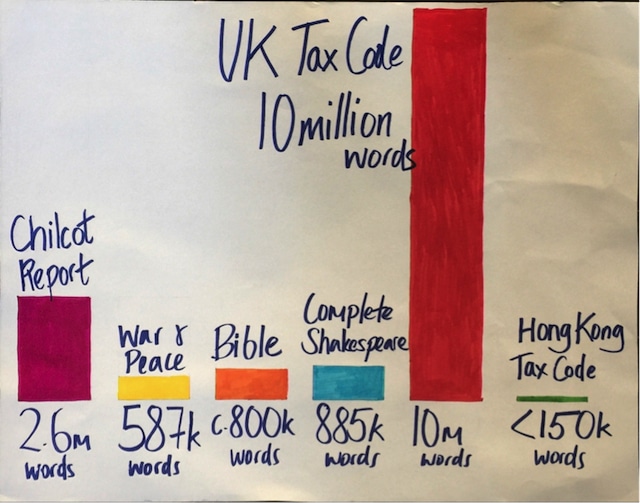 The Hong Kong tax code, which comes in at 276 pages, is about 70 times smaller or 1.5% the size. International tax lawyers generally agree that it is the most efficient.

However, it is one thing reading our tax code, another understanding it. Much of the language is incomprehensible.

Nigel Lawson, who was Chancellor between 1983 and 1989, made it his policy to remove a tax every budget and did so six times. He is also reduced the number of income tax bands to two. Since then the amount of tax legislation has ballooned. Gordon Brown was the worst offender. The tax code trebled in size while he was Chancellor. George Osborne came to power promising radical simplification, saying our tax code was “one of the most complex and opaque” on earth. He even set up the Office of Tax Simplification. The tax code doubled again under his tenure.

I’ve got a great system of simplification. It works really well. You tear it up and start again. If you write something that’s rubbish, you select and delete. You don’t keep adding more words to it in the hope that the rubbish ones will go away.

There are three reasons the UK tax code doesn’t get simplified.

First, and above all, simplification is hard. That is, however, no excuse.

Second, the reliefs, the tax breaks and the subsidies are what make the code so complicated. But with so many lobbying for a subsidy or a relief – whether based on their financial interests, their belief systems or a bit of both – it is difficult for a politician to stand up to that kind of pressure. But the complexity will continue as long our culture of lobbying and special interests does. These reliefs actually create inequality. One group – Philip Green or Amazon or Starbucks – whoever it is – have the resources to find the loopholes and exploit them. The rest of us don’t, and so pay more on a proportional basis. I paid more tax than Facebook last year. You probably did too. Facebook, by market cap, is one of the five largest corporations in the US. It paid £4,327 in UK taxes.

Third, and perhaps most importantly of all, incredible though it may seem, HMRC is not accountable to anyone in parliament. There is no Minister in charge. There’s a Secretary of State for health, education, the environment. There is a parliamentary Under-Secretary of State for Life Sciences, but no Secretary of State for HMRC. Many think it is the Chancellor, but the Treasury is a different department. HMRC is not accountable to parliament. A clue is in the ‘HM’ – Her Majesty’s. Technically, HMRC is responsible to the Crown. This goes back to the English Civil War, which ended in 1651. Like all civil wars, that was, basically, a war about tax – and who gets the revenue. Tax revenue is the property of the Crown, but only parliament dictates where it is spent.

There should be a Minister in charge. That Minister needs to be strong-willed, clear-thinking and obsessed with simplicity. I nominate Michael Gove. Failing that, the Queen should sort it out.