Taxidermy: Getting under the skin of a tax lawyer Ann's blog gives an insight into her world, both in and out of work.
From time to time she lets others borrow the talking stick.

Dominic Frisby is, unusually, a financial writer and comedian. After writing a blog on tax simplification last year he was approached by Ann to write another article. If you want to find out more about Dominic please visit his website or social networks (Twitter and Facebook).

The views expressed here are Dominic’s and do not necessarily reflect those of Ann.

Today we try to bridge the gap between the mundane world of the real and the rather more attractive realms of the ideal. We look at how we are taxed – and at how we should be. 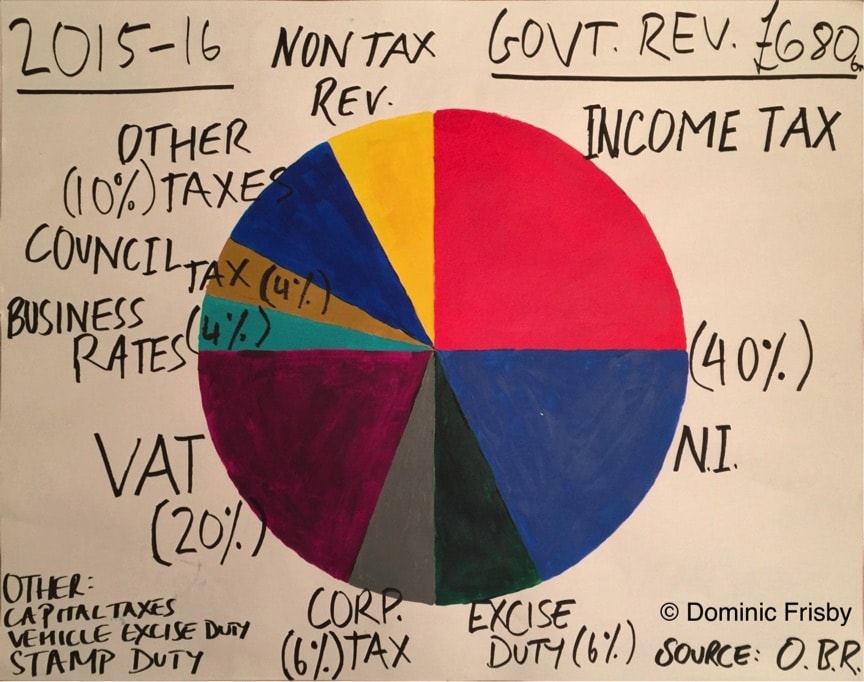 You can see that 40% of government revenue comes from income tax and National Insurance (which is really just income tax by another name) and another 20% from VAT. The worker pays the vast majority of taxes.

Income tax was introduced in the UK briefly in 1799 to help fund the Napoleonic Wars, but, hugely unpopular, it was then abolished three years later. Prime Minister Robert Peel brought it back in 1841 as a temporary measure, and that temporary measure has, so far, lasted 176 years.

But, across the West, it is only really in the 20th Century that income tax has become payable by everyman.

Jean Baptiste Colbert, finance minister to Louis XIV, famously declared “the art of taxation consist of so plucking the goose as to obtain the most possible feathers with the least hissing.” Income tax, collected at source as it is today, is an easy tax to collect. It involves comparatively little hissing.

I have numerous problems with income tax, but I will focus on two here. First, it penalises productivity. The harder you work, the more productive you tend to be, yet the more tax you end up paying. As a society we should be incentivising productivity not punishing it. Rather than tax the wealth that is earned, we should be looking for ways to tax the wealth that is unearned. Second, income tax exacerbates wealth inequality. Warren Buffet famously lamented that his secretary pays more tax than he does. It’s because income is taxed heavily, while wealth is not.

The way that most seek to better their lot, particularly those who start out with nothing, is through their labour. Yet we tax labour. The wealth of those at the top, meanwhile, does not derive so much from their labour as it does from the appreciation in the value of their assets – their houses, their land, their property, their companies, their stocks, their shares, their fine art. Assets are taxed at much lower rates for the most part. In many cases they are not taxed at all. When one group is taxed more than the other, the gap between the two will inevitably grow.

Meanwhile, the stealth taxes that are inflation, low interest rates and quantitative easing are another attack on the worker, because they devalue money. The worker who relies on his salary sees its value debased, while asset prices are actually pushed up and further out of his reach.

It is because of our tax system that we have created in the UK this culture of rentier-ism. As a society, I argue that we should not be taxing labour, but some thing else – land.

Nobody made the land. Nature gave it to us. By building on it, farming it or mining it, you might be improving it, but the land itself was always there. So this tax ignores what is on the land, and looks only at its unimproved value, which is quite easy to assess.

Not just the land, but the mineral wealth, the airspace, the broadcast spectrums – anything that is there through nature, rather than human endeavour.

If you want the right to occupy a plot of land exclusively, and you want the government to protect your title to that property, then a fee needs to be paid to the community because it is the needs of the community, which give the land value. The value of that land should be shared, not hoarded by a select few. What I’m describing might sound quite Marxist, but the ‘granddaddy’ of right-wing economists, Milton Friedman, described land value tax as “the least bad tax”.

Each parcel of land in the UK is assessed for its potential annual rental value. Remote, rural farmland will have a low rental value. Prime city centre real estate will have a much higher rental value. A tax is then levied based as a percentage of the annual rental value of that land (in its unimproved state). So you would not tax Buckingham Palace, but you would tax the crown on the rental value of the land on which Buckingham Palace sits. That percentage would be determined by how much a government needs for its spending. If this a high-spending government, then the percentage will be high; if it is a low-spender, the percentage payable will be low. One of the beauties of this system is that government spending will be felt directly by the taxpayer. There will be greater transparency.

Setting up this tax would require all the land in the UK to be assessed, which badly needs to happen anyway. According to statistician Kevin Cahill, as much of 50% of land in the UK is still unregistered. Once this has happened it is an easy tax to administer. It does not requite 10m words of tax code.

It is also a hard tax to avoid – the land is here, it is not in the Cayman Islands and you are the owner.

One of the early proponents of land value tax was the 19th century philosopher Henry George. George called land value tax the Single Tax, because it should replace other taxes. In all probability we will eventually see some form of it introduced in addition to other taxes, which is precisely the wrong thing to do. The Mansion Tax, for example, is a bastardization of the idea.

Homeowners instinctively fear LVT because their home is the biggest asset and, having paid so much other taxes through their lives, they don’t want to pay more. However, most people will pay less, particularly if LVT replaces other taxes, as it should.

Who would pay the most tax? Those who own the most valuable land. The Crown, the Grosvenor Estate, Pension funds, the Forestry Commission, the Ministry of Defence, Utilities companies, The Duke of Buccleuch & Queensberry and so on.

If said bodies and others don’t want to pay the tax, they don’t have to. This is a tax, which is voluntary. You simply sell your land to someone who is prepared to pay the tax. Thus the tax will force a much needed redistribution of land in the UK via natural market forces, rather than via the moral minefield that is state re-allocation. It will dis-incentivise land banking – the practice of sitting on land waiting for its value to appreciate – and encourage owners to put their land to good use.

LVT involves a fundamental re-think about the way we do things, a re-gearing of society. It makes me believe that any implementation is unlikely, except in some bastardised form. Politicians tend to get where they are by taking the line of least resistance and not rocking the boat. Those who stand for bold ideas tend not to last long. But when it comes to tax in the UK, the system is so badly in need of reform, we badly need a politician who will rock the boat.

This site uses Akismet to reduce spam. Learn how your comment data is processed.